TO CANADA AND BACK Part 2.

Posted by Stan M Rogers on August 26, 2010
Posted in: Ohio, TRAVEL. Tagged: Canada and back, Moose's bollocks, NIAGARA FALLS, Niagara on the Lake, US Border Patrol. Leave a comment 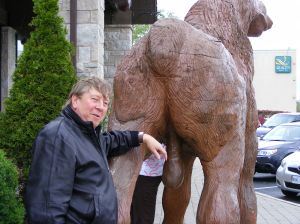 Apologies for my late posting of this. Only four months late but hey here we go. Canada was great. Niagara Falls were fantastic. The sun shone, well at least it did on the first day. After that I think we entered the monsoon season. It didn’t matter too much on the second day as we took a trip on ‘The Maid Of The Mist’. This is a small boat that takes you right up to and under the Horseshoe Falls. You get soaked whatever the weather but I thoroughly recommend it. The falls look just so much bigger from below and the noise of millions of gallons of water per second descending around us was thunderous and phenomenal.

From the Maid of the Mist.

And so we had a great weekend. We visited Niagara on the Lake, which boasted many English flags and joy oh joy. I found a shop that sold sausage rolls. Now we take sausage rolls for granted in the UK. I mean fresh ones, not the sad polythene wrapped ones on the supermarket shelves. You just can’t beat a nice hot greasy sausage roll. So hot that it burns the roof of your mouth … delicious. But in America? Nope they don’t exist. I found myself often salivating at the thought of one in Ohio. I even considered downloading a recipe and creating some. Hey this guy can do Walnut and Banana bread so why not sausage rolls?

But anyway here we were in this small colonial town in Canada. Sausage rolls on offer and I bought two. One for me and one for Kit. I don’t think my baby was that impressed and to be honest neither was I. They microwaved them for a start and pastry just don’t like that. The filling tasted of chili too. Hmmm Ok looks like I’d have to wait till I returned to the UK after all. But never mind.

Niagara on the Lake.

Also over the weekend we visited a great restaurant. In Niagara they have Planet Hollywood, Hard Rock Cafe and Rain Forest Cafe. We chose the Rain Forest Cafe. Lots of animatronic animals and you even get a thunderstorm every half hour. No rain. Just the thunder and lightning. (If only I had a penny for the amount of times I see lightning misspelled as lightening on line…) Amazing. There is even a starry night sky above. Very impressive but we thought it was more for families with kids. But it was a great experience nonetheless. 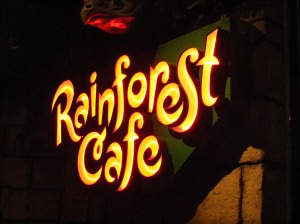 Another interesting stop off in Canada was on the way to Niagara on the Lake. The Totem Pole. A Native American craft shop. Very expensive but full of beautiful things. Native made moccasins,totems, headdresses etc. Kit bought me a wonderful bolo for my collection. Beautiful but almost too delicate to wear. I wanted to take some photo’s in the shop but I was told it wasn’t allowed as the Indians (sorry Native Americans) don’t like you photographing their art. Fair enough and we had a great conversation with the owner of the shop. It turned out that she wasn’t a local squaw but a rather nice silver haired lady from Bournemouth in England. Small world eh? It was a pleasure to see real American crafts. Mostly the stuff you see for sale seems to be made by a lost tribe of Cherokee who migrated to China. 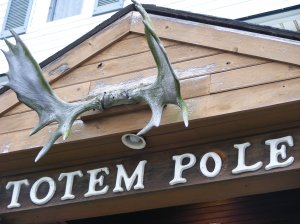 And so our trip to Canada came to an end. We made full use of the whirlpool jacuzzi in our room and spent the last night dining in Tony’s Rib Shack. But man we were shattered and so early to bed ready for our return to the good old USA on Sunday morning.

Sunday arrived cold and windy as I packed up my souvenirs. A stolen i Hop coffee mug, An empty pack of DuMaurier cigarettes that I had paid $12 for. Plus various souvenir sugar packs and coffee cup hand protectors. Happy days. I was also to collect a Radisson Hotel room key card that Kit forgot to hand back in. And we were on our way. Breakfast across the road in a small diner. Full fry up to keep us going and then we hit the road back to Uncle Sam. 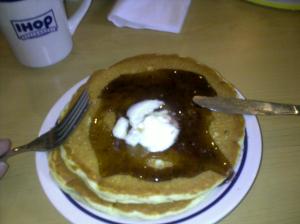 I still kept an eye out for real mounties but I finally realized that Canadian cops look much like American ones and drive cars. I sighed but still half hoped to see a Mountie in his red uniform on horseback but no luck so I settled back to enjoy the ride home only giving Kit occasional driving tips and helping her with my free advice. I know she appreciated it. I still have the bruises…We stopped at the duty-free supermarket before we hit the Peace Bridge and the USA. I spent my remaining Canadian pesos on a Canada for Dummies tee-shirt and baseball cap and that was it. We prepared to cross the border.

We just got the feeling that this could be eventful and it certainly was. We crossed the Peace Bridge and approached the immigration drive-thru booths. We handed the guard our passports. Next thing is we are being told to keep our hands in view at all times and turn the engine off as he slid a stinger under our back wheels. No “Welcome to the USA buddy.” No ” Hope you had a good trip.” Just a plastic roll of spikes rolled out to stop us escaping. This guy was seriously going to fuck up our day. I looked at Kit and shrugged. She smiled weakly as the car was surrounded by a half dozen armed border patrol troops. It must be what I’m wearing I thought. Maybe they’ve had a tip off that Bin Laden is going to enter the US via Canada dressed as a cowboy. Yes I had the full kit on. Cowboy hat, Wrangler jeans,Durango cowboy boots and not a turban in sight. We were led away to the immigration centre. I automatically went to put my hands in the pocket of my buckskin Native American jacket but was sternly warned to keep my hands in view at all times. 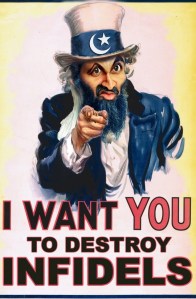 And so the same rigmarole that I encountered at Newark. Why was I in the US. What did I do for a living? Did I have any concealed weapons or drugs. I did briefly think of telling them I had a moose gun in the boot but I didn’t have a moose as I was a lousy shot but I decided not to. We were finger printed and processed and they eventually realized that I wasn’t an Al Qaeda terrorist on his way back from a bit of Canadian r&r and let us go. I must admit I was worried as they searched the car. They might think I was an i Hop mug smuggler.What about my stash of stolen sugar packs from various Canadian coffee shops. I could just imagine them thinking…”Hmmm individual packs of cocaine?” But no. They let us go. And we breathed a sigh of relief as we exited the American side of the immigration building To find the car parked snugly beside a fleet of border patrol cruisers. Huge and powerful Dodge Chargers fitted with massive iron ram bars. The Border Patrol like to play hard but we were free and we drove off smiling.

Until we were about a hundred miles down the road. “The keys.” I said.”Did we get the car keys back Kit?” We searched and no, we had no keys. Well I had mine but Kits were still back at the immigration building. Kit’s car is key-less entry. If you have keys in your pocket you can unlock the car and drive away. Because I had mine in my pocket that was possible but my baby’s set were still back at the border. We stopped on the hard shoulder and called the border patrol. And after a few frantic calls they found them and promised to FedEx them to us. Panic averted and we set off home. 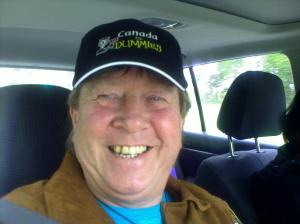 I even drove the last hundred miles or so to give my babe a rest. It didn’t stop her taking the mickey out of me though at one of my frequent coffee (smoke) stops. I saw a large AWD with a propeller on the back. I was telling Kit how cool this was. I supposed he just drove down to the lake and launched himself. Maybe did a bit of fishing. Took it easy on the water. I noticed Kit grinning before she told me it was just a fancy decorative tow hitch cover. Ok I’d been had but it had been a nice idea. I didn’t mind at all.

Loving driving on the open road. 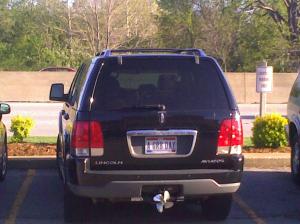