Last week. Friday 15th April to be exact Me and Raven went to see Rush at the Quicken Loans Arena in Cleveland Ohio. Rush have always been one of my favourite bands particularly in the late 70s/early 80s and so when my Raven surprised me with the tickets I was ecstatic. Out came the old albums (well OK from the hard drive) and I was back into 2112 and A Farewell To Kings my personal favorites from their many albums. Brilliant stuff. For a three piece band they sound amazing.

Anyway the 15th arrived and we were on our way. We are in Columbus and Cleveland is a two hour drive north. We set off early so that we could stop along the way and their is only one place to stop for me which is about half way. Grandpa’s Cheese Barn and Fin, Feather and Fur, both in Ashland Ohio. World HQ of Nice People the sign tells you on the freeway. 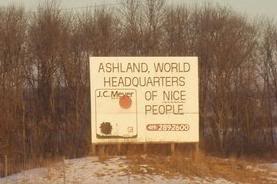 I love to look around Fin, Feather and Fur first. It’s a mecca for the hunting,shooting and fishing fraternity but for me the most fascinating items (being from England) are the weapons, particularly the guns. We pulled up outside in the car park mostly populated by 4X4 flatbed vehicles. I was expecting to see the odd dead deer or two slung across a few hoods but no. They must’ve been there to stock up on ammo before they went a shooting that day.

After my customary admiration of the hunting bows and knives we hit the upstairs gun department. They probably stock more weaponry than a small third world country and I was enjoying this immensely. From the hugest hunting guns down to small pearl handled derringers, they had it all. And the tee-shirts? Wow I think I’d be lynched by the animal lovers back home if I wore some of these items which mostly seem to glorify beer and blasting not so small furry animals to kingdom come but I find I have a gory fascination with all of it. From there we pull acroos the road to Grandpa’s cheese barn. It’s a great place with lots of free tastings. We had a coffee and a hotdog and we even found our favourite. Jalapeno jam. I love this stuff. It tastes like lime marmalade with afterburners but as I write this a week later it has all gone. Time for another visit to Grandpa’s soon. We also saw an Amish girl and her young son running a home made basket stall. She wouldn’t let us take pictures though. The Amish don’t like photographs. Apparently the reason for this is that it promotes vanity. Oh well, time to hit the road again.

This time I drove and within the hour we were in Cleveland Ohio. 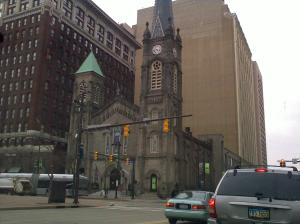 We stopped so that Raven could drive as I still find driving here especially in cities a little disconcerting. We were about to consult the map for the venue but by luck I had pulled up right along the street from the Quicken Arena. Very lucky but of course the problem is in finding somewhere to park. After we had seemed to see most districts of Cleveland we found a place. Right across from the arena and only $10 for the evening. Result.

Of course the first stop for me as always was for Coffee and we found Erie Island Coffee just down the street. Nice place and as soon as the coffee top up treatment was accomplished we headed across the street to the Arena.

There were Rush fans of all ages heading in with us and I was impressed by the place. We recieved dire warnings with the tickets that no photography was allowed and so I had left the phone and camera in the car but we still had to pass security. First the metal detectors and then Raven’s bag was checked out but we were all clear and headed off to the foyer. First stop was the souvenir shop for the tee shirt and my Raven got me a great tour one. I just had to visit the loo to change into it. Now I really felt the part.

YEP CLEVELAND IS ON THERE.

We rode the escalator up to our level, I was so looking forward to finding our seats before the show started and we made our way around the corridor till we found our entrance … EEEEEEEEK! … we found it and …. EEEEEEEEEK. We were so far up I felt I may need oxygen. Now I hate heights and boy was this high. We were one row from the very top of the arena looking down what looked like a sheer mountainside. I tried not to look down as we found our seats but eventually I had to turn. Oh my god I don’t know how I stopped myself from running straight out again. The seating was so steep that people in the row in front of us’s head level was at our foot level. I think I even got a little agoraphobia too so vast was the place. 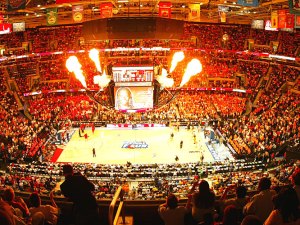 NOT RUSH BUT SHOWS HOW HIGH WE WERE IN THE HIGHEST SEATS...EEEK!

I suppose that I didn’t run out as I was rooted to my seat trying not to look down and clutching the seat next to me for dear life. But my Raven as usual was brilliant. She knows my medication well by now and up she got leaving me attached to her seat back so tightly that I think I’d have needed cutting free. And soon she was back with GIN …wonderful Gin. 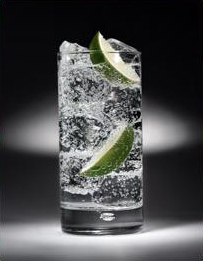 A couple of large ones and the jitters started to go just in time for the show. And the show was fantastic. All my old favourites. Closer to the Heart, 2112, Spirit of the Radio, Tom Sawyer. They worked back in time and also played the new songs Caravan and BU2B (Brought Up To Believe). 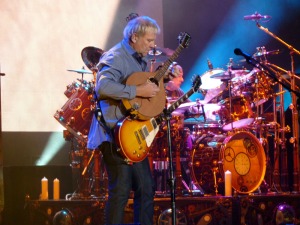 The light show and pyrotechnics were great too but I was very impressed by the airship. It was remote controlled and floated about taking film of the crowd and the band. Everytime it passed we were up and waving at it. But again we were so high that it was actually lower than us. But one thing did annoy me. I had adhered to the rules and left the camera in the car but now I was in everyone seemed to have camera’s or camera phones. The guy next to me even had a full size camera of some desciption with a massive telephoto lens on it. He was happily taking some fantastic movie film and busily emailing it to friends I suppose. I was gutted. I could have got some great shots with my FUJI but alas it was sitting lonely in the car and so I am afraid I have no pics to put up here. I have put some from the program up instead. 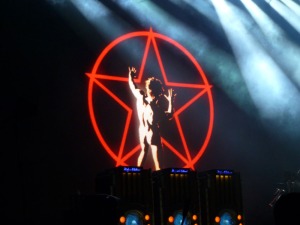 And so the night went well. My Raven kept me lubricated and vertigo free so much so that by the end of the show I was on my feet and singing along fearless of the vertiginous drop in front of me. I had a wonderful time. One other fantastic piece of news. Rush had this show filmed and it will be released on DVD sometime in the future. You can be sure that I’ll be getting a copy.