HEATHROW TO CANADA…AND BACK IN ONE DAY.

Well finally. The day had arrived. Last Tuesday 19th October my time to fly had arrived. Oh yes I had encountered the fear as usual. Even the day before I had panicked so much that a Valium was used. But here I was. 6:00 am on a cold October morning and waiting for my taxi to Heathrow.

Me and my Raven.

But apart from the fear there was also a great sense of joy. Just mere hours and I would be with my Raven once more. Warm and safe in her loving arms. I tried to let the joy overrule my fear and slowly it worked as I travelled to the airport. The usual continuous M25 roadworks delayed us but I’d allowed plenty of time. My flight wasn’t till just after midday. Dawn cracked the sky on the way down and there was more joy in the clear blue sky and sunshine. One fear less I thought happily. No raging storms or inclement weather to complicate my take-off at least and before long I was paying off my driver and loading my two bulky suitcases onto an airport trolley courtesy of Terminal 3 at Heathrow. I checked my luggage in, paying the extra thirty pounds for my surplus suitcase and then off to Costa’s for coffee. I took it outside to enjoy one of my last cigarettes before flying. 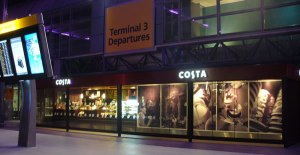 Before long the fear hit me again. Watching the continuous stream of aircraft taking off above me gave me the jitters … how the hell can those damned things fly without falling out of the sky? But … well I swallowed a Valium with my second cappuccino and what felt like my fiftieth fag and smiled. “Too late now Rogers, I told myself, no quitting now.” And I walked into the terminal to check in. 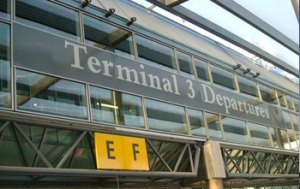 It was the usual. I bought 200 Camels in Duty Free and strolled to the security gates. That ritual is so familiar to me now. Laptop out, belt off, jacket off, keys, phones, wallets into the tray and walk through the arch …. beeppppppppp. Waved over with the wand and through to air side. Next job? … alcohol to snuggle comfortably alongside the Valium in my fearful tummy. Bar found, pint of Stella Artois … mission accomplished. I rang friends and Dani my daughter. I called Raven and heard her sleepy voice. Sometimes just talking on the phone makes me forget the terror and soon it was time. I swallowed my last Gin and Tonic (V.Large) and ambled off to my Air Canada departure gate.

And before long I am aboard. My pre-booked seat is close to the emergency exit … ha. Also the flight is half empty so I have two vacant seats next to me … joy. I call my friend Les because I can but before long we start to taxi and it’s phones off time. I have three so it takes a little while. We sit awaiting take-off and we sit and wait and wait. Half an hours delay but at last we line up on the main runway.

All is quiet … pilot welcomes us aboard … and YES ….. The engines spool up the pilot checks the flaps and then we start to hurtle along the runway. We build up speed and I can feel every last crack on the tarmac. Then just as I think we aren’t going to make it … we lift off. Yehaaaaaa … the Columbus Cowboy is airborne. Shit scared but aloft at last and on my way to my baby after four months of wasted time in the UK. The usual ear popping and clammy palms. Ass cheeks tightly clenched, breathing on hold but then. OMG the seat belt signs click off the plane starts to turn and we are on our way. The cabin crew get busy serving us lunch. Chicken or beef? I take beef although I defy anyone to guess that on a blind taste test and more joy … free booze with my dinner. I accept a bottle of airline wine and glug it nervously but the way I look at it now is it’s too late to worry. I can’t get off if I even wanted too and so I sit back to ‘enjoy’ the flight.

Glory be the flight is smooth. No turbulence just the steady roar of the Airbus engines and I open one of my miniature malt whiskies after lunch and settle back to enjoy the in-flight entertainment on the seat back video screen. I try to concentrate on The Karate Kid but by ten minutes in I am bored. I try listening to music. I try to sleep but no chance. I keep clicking onto the flight map trying to will us closer to Canada. Height 39,000 feet. Air speed 560 mph. Outside air temp minus 70F. Bloody parky then but at least the knowledge that in the event of disaster I’ll freeze to death before hitting the bloody Atlantic Ocean. Hush Rogers it ain’t going to happen. I open another Scotch. I almost watch The A-Team. And the little plane on the map slowly gets closer to Toronto. Over Labrador and Quebec. I flip the bird to the Quebecois as we fly overhead and before long my ears start to pop as we descend into Toronto. I look at my watch and realising it is still on UK time I adjust it. Not easy as it has 4 buttons and I need 3 to change it. After going through several world time zones … sorted and we land in Toronto Pearson International Airport 15 minutes early at 14:45 pm local time

And my ordeal began …. 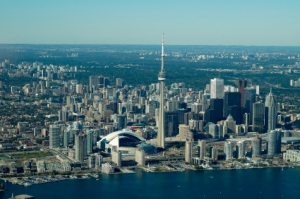 5 comments on “HEATHROW TO CANADA…AND BACK IN ONE DAY.”