GOD DIED AS SOON AS WE INVENTED HIM.

Posted by Stan M Rogers on March 5, 2010
Posted in: Views of Religion. Tagged: fallacy of christianity, No one else to blame, religionist, There is no god.. 8 Comments

One of my favorite bugbears. Religion. Why does it keep coming up?

Anyway, here briefly are my views.

God was invented by lesser people to excuse their own actions, to take the blame as it were for their own mistakes and weaknesses. When will people realize that there are no gods. No guiding spirits. Just us and our conscience and lack of faith in ourselves. For if there is any kind of divine hope and guidance it lies within us, not without.

We will only attain that divinity when we throw away the crutch of religion and accept that WE are god. We have no one to blame but ourselves..

The idea of a god was always an invention of those who wanted to control the people. Humankind needs to wake up and understand this. The time for gods is past. Consign god to rest with the fairies and Santa Claus.

I am sorry though if you are a religionist. I will let you get on with your fantasy. But god died as soon as we invented him…

It has been two months now since I arrived in Ohio and a while since I last wrote a piece on here. I was originally booked to fly back a few days ago on March 1st but … well I am now booked to fly back to the UK at the end of June. Yep fantastic that I will now get the chance to see Ohio in the spring and early summer also.

So what has happened in the past two months? Well firstly and mainly, lots and I mean LOTS of snow. February broke the one hundred year record for snow in central Ohio. The average February here sees six inches approximately. This February we had just over 30 inches beating the 1910 record by two inches and I am pleased to say that I survived it. Being from the South Eastern UK that is something when back home anything more than a half an inch results in chaos. Schools close, public transport grinds to a halt and power cuts become widespread. I am not saying everything runs totally trouble free here but I suppose they are more used to it here than in the UK and things don’t come to a complete standstill. One good thing I noticed here are the army of private 4X4 pick-ups driving around with ploughs (plows to Americans) attached at the front and salt spreaders in the rear of the truck. It seems they can make quite a good living (albeit seasonal) clearing Mall and business car parks of snow.

The other thing I noticed were the steadily growing mountains of snow everywhere. Last week we drove past the Colossus that is Sears at our local mall to find it almost obscured from the road by the aforesaid mountains. The reason for this is that it is so bloody cold here that the snow doesn’t melt and although the plows (yes I know I am adopting Americanese) have to put the snow somewhere and so it just piles up. Outside the apartment by the parking lot our own personal mountain is higher than the cars now. One thing though that we do have in common with the UK is the pot holes in the roads. You have to be careful out there not to lose a wheel or at least put your steering out if you hit one. 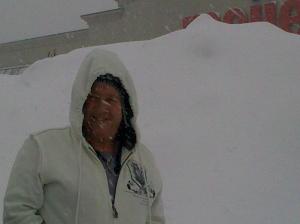 Life has been entertaining as always with my lovely Raven and gets better all the time. One of the many high spots was Raven getting me a Nintendo 64 on Valentines Day complete with Goldeneye (James Bond 007). Yes I know the 64 isn’t the newest games system out there but after my enthusing about it and Goldeneye she bought me one as a surprise. Talk about hog heaven. I am back in 1998 now refighting the levels again….ahhh nostalgia is a wonderful thing. Raven also got me a teddy bear for Valentines Day. Yea I know. I don’t seem the teddy bear type but I love fluffy cuddly things (ok go on I won’t stop you haha) and John Lennon or Lennon for short sits comfortably beside me in bed at night. 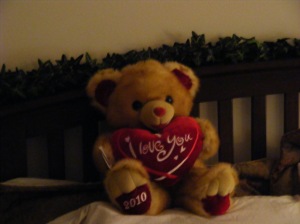 Another form of entertainment I have taken up is … the sun bed tanning and the fitness centre and yes I have received the dire warnings from friends about the dangers of the UV. I am being careful and never tan too long. I just think it would be nice to take on a warm honey colour rather than my normal pasty white or slightly prawn pink shade in the English summer for a change. It is also very therapeutic with the dullness of the winter weather here to lay naked under the lights soaking up the rays while listening to rather loud rock music, and finally I am starting to go brown … all over. I did initially cover the naughty bits with a sock (ahem, a large one aha) because I was worried about my short n curlies becoming burnt n crispies but they seem to have survived and hopefully the wedding tackle is now looking like it ‘honeymooned’ in sunnier climes. 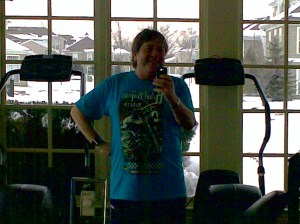 The fitness centre is becoming my routine also although I do feel like the hamster on a wheel sometimes. I am building up slowly. Don’t want to strain anything do I? And so I walk or sort of jog for ten minutes on the treadmill with a 3% incline most days. Then I sit on various painful looking contraptions and lift 40-50 pounds or pull 40-50 pounds or push 40-50 pounds. I hope to develop muscular abs this way soon before I pull neck muscles. I also cycle for 8 minutes on level 5 resistance all the while sitting indoors listening to loud music and looking out of the windows at the snow. How cool is that? I finish of with lifting a few weights to some routine I saw on breakfast TV. Thank god that most days I am alone there and no one can see the pain on my face….aha.

And lastly. Driving around (I am on freeways now) I notice the price of gas (ok petrol). Americans pull their hair out at the price of it at about $2.50 a gallon. Just a little bit of comfort to my American pals. In the UK it is around £5.00 a gallon. That means $7.50????? Yep three times the price although you all might like to Wiki gallons. American gallons are SMALLER than UK ones by about 10% and for the reason check it out here. http://en.wikipedia.org/wiki/Gallon 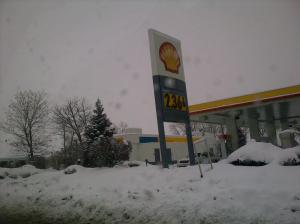 Take care my friends and until next time. ‘We only need the courage to say Yes I can do this and the strength to say No I am not afraid.’